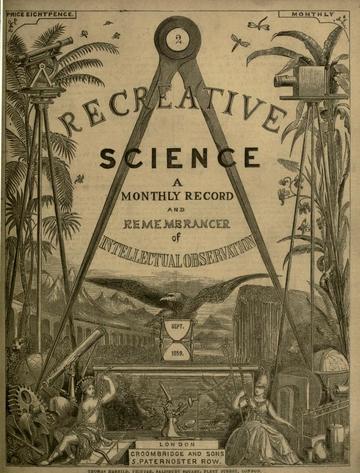 Recreative Science was a short-lived periodical (even by nineteenth-century standards), and as its title suggests, it was aimed at a broad audience who were interested in natural history as an enjoyable hobby. In the introduction to the first issue, written in particularly flowery language, it proclaimed that 'this is an age of invention and discovery, and the meanest affairs of life, equally with the noblest works of utility and elegance, are indebted to science'. It was therefore hoped that encouraging the 'spirit of research' would 'help in the onward march of human advancement', but also provide 'repose and refreshment'. 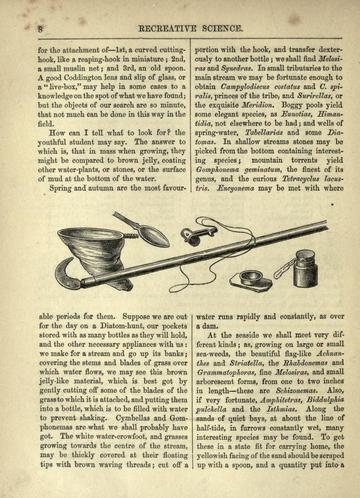 In keeping with its stated aim, Recreative Science focused on aspects of natural history and other branches of science that  readers could try for themselves at home or in their local area. One of the earliest articles gave instructions on 'how to gather diatoms', a type of microscopic algae found in all bodies of water throughout the world. These single-cell organisms are protected by shells of silica, which occur in a wide variety of shapes, sizes, and colours. As microscopes were becoming increasingly affordable for Victorian households, the beautiful structures of diatoms were a particularly popular subject of study. They could be collected at the seaside or from shallow streams, and the Recreative Science article helpfully provides an illustration of the necessary equipment, which included some more specialist gear (a 'Coddington' magnifying lens) and less sophisticated items ('an old spoon'). The following issue contained a follow-up article explaining how the diatoms should be prepared for viewing through a microscope. 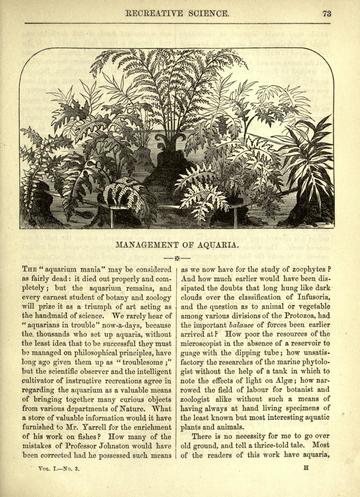 Regular features included meteorological and astronomical observations made by the wealthy man of science Edward Joseph Lowe (1825-1900) from his observatory in Nottingham, and 'Things of the Season' listed such occurrences for that month as the arrival and departure of migratory birds and the flowering of plants. Readers could then compare their own results with those of Lowe, and were alerted as to which species to look out for. Despite the widespread popularity of science as a pastime, Recreative Science presumably struggled to find a sufficient audience to support its publication, as it was discontinued in 1862. However, it was reconfigured and launched again as the Intellectual Observer later that year.