The Victorian origins of 'space weather'

Today we take it for granted that activity on the Sun causes colourful displays of the aurora (the ‘northern lights’ in the northern hemisphere; the ‘southern lights’ south of the equator) and, in extreme cases, power cuts and disruptions to satellite communications. We now know that the Sun triggers these phenomena through its magnetic field and the stream of subatomic particles it emits, called the ‘solar wind’ – which in turn affects Earth’s magnetic field. We call the state of the solar wind and magnetic activity in the solar system ‘space weather’. Aurorae do not just take place on Earth: they can occur on any planet that has both a magnetic field and an atmosphere. They have been photographed in the atmospheres of Jupiter, Saturn, Uranus and Neptune; more recently, spacecraft have imaged them in the skies of Mars.

We strongly associate pictures of aurorae on other planets, as well as terms like ‘space weather’ and ‘solar wind’, very much with the space age. However, the possibility of detecting aurorae on other planets – and, by implication, the existence of the Sun’s influence throughout the solar system – was first suggested by two British astronomers working in the mid-nineteenth century: Balfour Stewart (1828-1887) and Edward Sabine (1788-1883).

A correlation between aurorae and the Earth’s magnetic field had been known since the eighteenth century, when Anders Celsius (best known for the Celsius temperature scale) and Olof Hiorter noticed frequent and wild oscillations in the direction of magnetic north during an auroral display. In the 1830s, the astronomer and scientific polymath John Herschel (1792-1871) undertook a systematic study of sunspots while on a four-year observing expedition at the Cape of Good Hope in South Africa. In 1837, he noticed a peak in both sunspot and auroral activity and thought that it would be worth investigating whether a correlation between these two phenomena applied more generally. Six years later, German apothecary and astronomer Heinrich Schwabe discovered that the number of sunspots waxed and waned in a ten-year cycle. Then, in 1852, Sabine discovered a similar periodicity in the Earth’s magnetic field and noticed that it coincided exactly with Schwabe’s sunspot cycle. Herschel saw this discovery as confirmation of a link between sunspots and aurorae, and he now suggested that the ‘red clouds’ seen during a solar eclipse (now known as solar prominences) might be ‘reposing auroral masses’.

In response to Sabine’s discovery, the British Association for the Advancement of Science (BAAS) set up a solar telescope and a suite of magnetic instruments in the Association’s observatory at Kew, to further investigate this correlation. The solar telescope, known as the Kew ‘photoheliograph’, took pictures of the Sun every clear day so that sunspot activity could be compared with the magnetic readings. (See separate article and associated video on the ConSciCom web pages about Elizabeth Beckley’s role in solar photography at Kew.)

In 1859, Balfour Stewart became superintendent of Kew Observatory. On 1 September that year, just two months after Stewart took up his post, the astronomers Richard Carrington and Richard Hodgson independently noticed a pair of bright lights appear above a large sunspot group, only to disappear a few minutes later. The timing of this explosion on the Sun, now known to have been a solar flare, coincided exactly with a jump in the traces produced by the magnetic instruments at Kew, and triggered Stewart’s interest in connections between solar activity and terrestrial magnetism.

In the early 1860s, Stewart and Sabine engaged in a lively correspondence on the nature of the newly-discovered Sun-Earth connections. In an August 1862 letter to Sabine, Stewart revived (without acknowledgement) Herschel’s 1852 assertion that the red clouds seen during eclipses might be aurorae on the Sun. In his reply to Stewart, Sabine took the speculation further, suggesting that the solar ‘aurorae’ triggered aurorae on Earth and wondered whether ‘all the planets participate in such appearances, though we may never attain to their observation’. Stewart, in turn, suggested a variety of observational evidence in favour of the red solar clouds being aurorae, including the fact that, as with sunspots, their greatest frequency coincided with periods of magnetic disturbance on Earth. As to Sabine’s suggestion that aurorae might occur on all the planets, Stewart wondered whether ‘perhaps Mr De La Rue could photograph one [of the planets] during an Aurora and ascertain this’.

Warren De La Rue (1815-1889) was then Britain’s leading pioneer of astronomical photography. He was instrumental in designing the Kew photoheliograph and was famous for his photographs of the Moon. Neither De La Rue’s nor anyone else’s photographic technology was then capable of photographing aurorae on other planets, but since 1979 spacecraft, including the Hubble Space Telescope, have photographed aurorae around the poles of Mars, Jupiter, Saturn, Uranus and Neptune (though scientists believe that Jupiter’s aurorae are due primarily to the interaction of the planet’s magnetic field with its volcanic satellite Io rather than the solar wind). 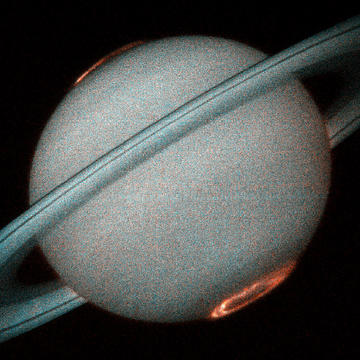 Although Sabine and Stewart’s prediction had to wait more than a century to be vindicated, their logic was correct: something emanating from the Sun was influencing the entire solar system at the same time. We now know that this ‘solar wind’ is made up of charged subatomic particles that become tangled in planetary magnetic fields and cause their atmospheres to glow with auroral light. What, however, could these two visionaries have had in mind in 1862, when the smallest particle known to exist was the hydrogen atom?

Stewart’s work makes it clear that he believed solar emissions travelled through an invisible, all-pervading medium called the ‘ether’. In the mid-nineteenth century, with the rise of the wave theory of light, such a medium had become a popular way of explaining how light travelled through space. In the forefront of this ether physics was Stewart’s contemporary and fellow Scot, James Clerk Maxwell (1831-1879), whose electromagnetic theory described mathematically how light is an electrical and magnetic wave that propagates through this hypothetical ether. The ether was needed in the wave theory of light, because as a wave, light needed something to propagate through, just as sound requires air in which to travel.

Moreover Stewart, a staunch Christian believer, saw the ether as a convenient way of explaining the newly-discovered law of the conservation of energy without compromising the religious doctrine that the universe would one day come to an end. The ether provided a repository into which all the energy in the universe would eventually be dissipated, leaving the universe ultimately devoid of light and heat.

Stewart believed that as the planets changed their positions relative to the Sun, they moved through this ether and drew energy out of the Sun, causing magnetic effects that gave rise to sunspots and, as a consequence, aurorae. According to Stewart, the ether meant that the Sun and planets were tightly bound to one another, so that the motion of one body would have an effect on the others. Over the 1860s and 1870s, he used the solar results at Kew to develop some increasingly elaborate theories that attempted to correlate the positions of planets in their orbits with variations in sunspot activity. At the same time, he built experiments to find evidence for the ether, by measuring the heating of a disc spinning rapidly in a vacuum, eliminating friction with the air as a source of heat.

Watch a short video taken in 2007 by the STEREO A spacecraft, showing the tail of Comet Encke being buffeted by the solar wind – thought by Balfour Stewart and his contemporaries to be due to the ether. (Courtesy of NASA/STEREO.)

Both these approaches had inconclusive results. Stewart claimed to have detected heating in his spinning disc experiments, though modern scientists believe that this was due to the less-than-perfect vacuum attainable with the equipment of the mid-nineteenth century. After 1905, the ether theory gradually became discredited by Albert Einstein’s special theory of relativity. This painted a new picture of how light waves travel through space, dispensing with the notion of an ether.

However, the story of Balfour Stewart’s researches into solar-terrestrial physics has one ironic twist. In 1870, Stewart left Kew to become professor of ‘natural philosophy’ (now called physics) at Owens College in Manchester (now the University of Manchester). One of his students at Manchester was a young Joseph John (‘J. J.’) Thomson, who in 1897 would discover the electron – the first of the subatomic particles now known to make up the solar wind.