The Magazine of Natural History and Journal of Zoology, Botany, Mineralogy, Geology, and Meteorology (1828-40) 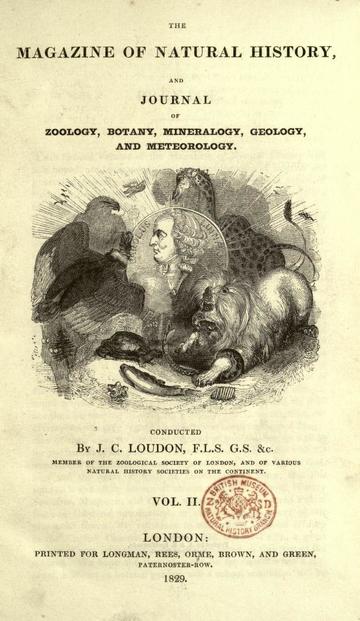 One of the earliest illustrated natural history periodicals in Britain, the Magazine of Natural History was established in 1828 by the influential Scottish botanist and garden designer John Claudius Loudon (1783-1843). The primary aim of the magazine was to promote natural history as a pleasurable and useful pastime, and to 'render a taste for this study more general among all classes of society'. To achieve this goal, Loudon invited 'every reader to communicate every circumstance, even the most trivial' regarding any aspect of natural history, and encouraged 'all who are desirous of information' to pose questions that could be answered by more experienced readers. A secondary object was to 'collect scattered facts and new discoveries', and it was hoped that whoever read the periodical's pages would 'know all that is already known' and be made 'acquainted with everything new and interesting', making them a 'practical and scientific naturalist'. 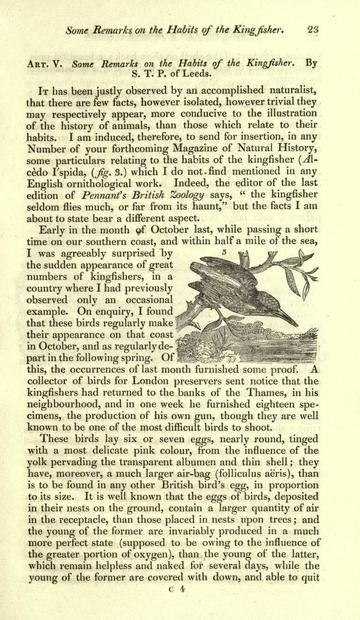 The contents of the monthly magazine were wide-ranging, focusing particularly on botany and zoology, but also including geology and meteorology. The subjects covered by articles varied from observations regarding British animals and plants that readers could have seen in their immediate surroundings, to more exotic reports from correspondents scattered across the globe. In the first volume, readers learnt about the habits of the kingfisher and the American sea eagle (the latter written by the leading ornithologist John James Audubon), and were introduced to the Linnean system of plants by Elizabeth Kent ('Miss Kent'), a botanist and writer who moved in the same circles as Romantic poets such as Leigh Hunt and Percy Bysshe Shelley.