The Field Naturalist: a review of animals, plants, minerals, the structure of the earth, and appearances of the sky (1833-34) 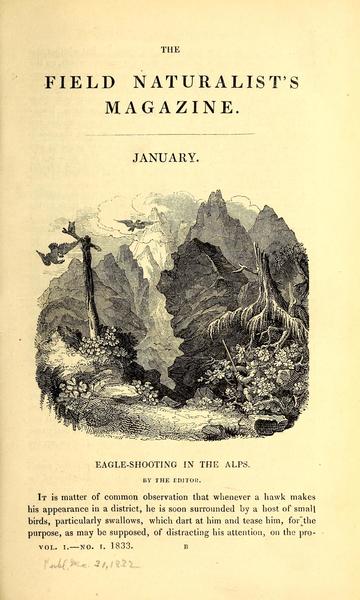 The Field Naturalist was established and edited by James Rennie, a Scottish naturalist who was Professor of Natural History at King's College, London, from 1830-34. He was therefore unusual in this period for earning a salary through his scientific work.

The periodical combines a mix of observations made by British naturalists and translated pieces from works in other languages. An early issue included an extract from the ancient Greek philosopher Aristotle, whose studies of animals were considered pioneering works of zoology and part of a tradition which Rennie and his peers wished to follow. Most of the more contemporary articles were accounts of field excursions made by the authors in pursuit of specimens. The first article, written by Rennie, describes his experiences of shooting eagles in the Alps. Killing birds in this way was a widely accepted practice in ornithology, as close inspection of the dead animal was considered to be the most reliable way of identifying the species and studying its anatomy. An article in the same issue includes an illustration reproduced from a drawing of a cuckoo, shot in County Cork, Ireland, sent to Rennie by the naturalist Robert Ball (1802-1857). From this image, the zoologist Edward Blyth (1810-73) wrote a scientific description that was published alongside. Blyth was a frequent contributor to the Field Naturalist, usually on the subject of birds. Both he and Ball were young men at the time, but would later go on to carve out scientific careers. Blythe became curator of the Royal Asiatic Society's museum in Calcutta, and several species of bird still carry his name. Ball served as Director of the Dublin University Museum and designed a new kind of dredge net for collecting marine specimens. 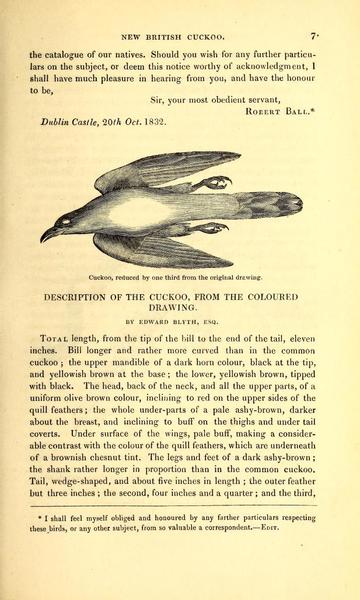 In addition to numerous black and white illustrations, the Field Naturalist also contained a small number of coloured plates, such as the vivid Green Tody, a tiny bird native to Cuba, and the Zebra spider, a jumping arachnid found throughout Europe and North America. It is not clear why the periodical ceased publication, but it is probably more than coincidental that the Field Naturalist ended in the same year Rennie left his position as Professor of Natural History. 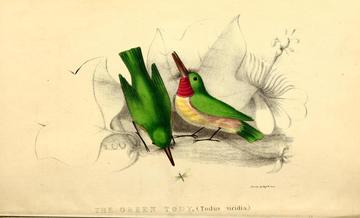