The Entomologist’s Monthly Magazine was not the only periodical launched in 1864 that catered exclusively to those who collected and studied insects. Unbeknownst to Henry Tibbats Stainton, Thomas Blackburn, and their fellow editors of the Monthly Magazine, others were plotting to fill the gap in the market left by the Entomologist’s Weekly Intelligencer (1856-61). In fact, it was someone very well known to them who would beat them to it, when Edward Newman (1801-1876) commenced the Entomologist in May, a whole month before his unwitting rivals. Newman, the head of a printing company that specialised in natural history publications, was proprietor and editor of the Zoologist (1843-1916). As a friend of Henry Tibbats Stainton (1822-1893), Newman had also printed the Intelligencer, although their relationship had since become less close. According to Newman, many saw him as the man to remedy the lack of an entomological periodical, as he claimed that ‘between the demise of the Intelligencer and the birth of the short-lived Weekly Entomologist I had no less than ninety-seven pressing solicitations to commence an entomological periodical’.

The Entomologist of 1864 was not a new periodical, but a revival of the same journal Newman had originally published from 1840 to 1842. At the end of this first volume, he decided to merge the Entomologist with the Zoologist, a decision that was likely to have been at least partly informed by financial considerations, as unlike his friend Stainton, Newman had no independent wealth with which to fund his periodicals. A specialised magazine such as the Entomologist was not a commercially viable option in the 1840s, while the Zoologist appealed to a wider readership and thereby turned a profit. However, by the 1860s, and in the wake of the Intelligencer‘s success, it seems there was a much more considerable demand for an exclusively entomological periodical. The second volume of the Entomologist therefore commenced in 1864, over twenty years after the end of the first, with this hiatus possibly being the longest lapse of time between consecutively numbered volumes in periodical history.

In terms of contents, the Entomologist was a mix of the shorter notices and observations common to almost all natural history periodicals of the period. Following in the populist spirit of all Newman’s publications, it admitted a wide variety of contributors and was far less exclusive than the Entomologist’s Monthly Magazine. A noteworthy contributor to the magazine during 1877 was Eleanor Anne Ormerod (1828-1901), who published a series of articles on the subject of injurious insects including the turnip weevil and the Colorado beetle. That same year, Ormerod issued the first of her Notes for Observations of Injurious Insects, a questionnaire through which she collated information regarding species that posed a threat to crops, and would go on to be appointed as consulting entomologist to the Royal Agricultural Society in 1882. As the name of the Colorado beetle suggests, it originated in the United States, where it had become a major pest to potatoes. In 1877, reports of its arrival in Europe – aided by unwitting human transportation – raised considerable alarm. As Ormerod noted, beetles had been found in Liverpool, presumably brought by the ships coming to dock there. She gave a brief account of their lifecycle and appearance, and warned ‘at present we have only to do with stragglers; it is of the greatest importance to spread knowledge of their appearance over the country as rapidly as possible, that none of these may escape’.

Eleanor Ormerod’s article on the Colorado Beetle, given prime position at the start of the issue for September 1877

At Edward Newman’s death in 1876, the Entomologist remained under the ownership of his son, Thomas Prichard Newman. The editorship was given over to John Thomas Carrington (1846-1908), a naturalist and journalist who would later purchase the popular natural history periodical Hardwicke’s Science-Gossip. In 1890, the Entomologist was acquired by the wealthy lepidoperist John Henry Leech (1862-1900). Although Leech did not travel himself, he had amassed a vast number of butterflies from China, Japan, and Korea through the efforts of collectors working on his behalf. Leech intended to use the Entomologist as a medium through which to publish the research upon these specimens, and accordingly appointed the curator of his collection, Richard South (1846-1932), as editor of the periodical. Subsequently, under various different editors and owners, the Entomologist would be published continuously until 1973. 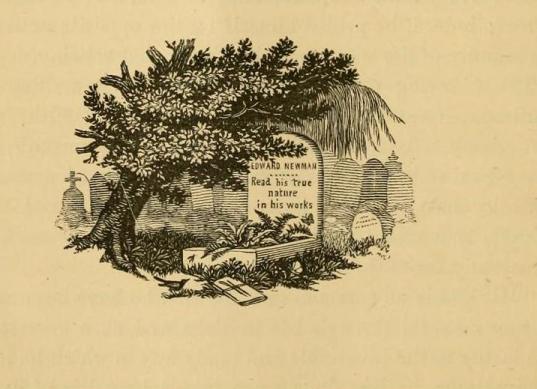