The Contagion Cabaret at the Science Museum (London) 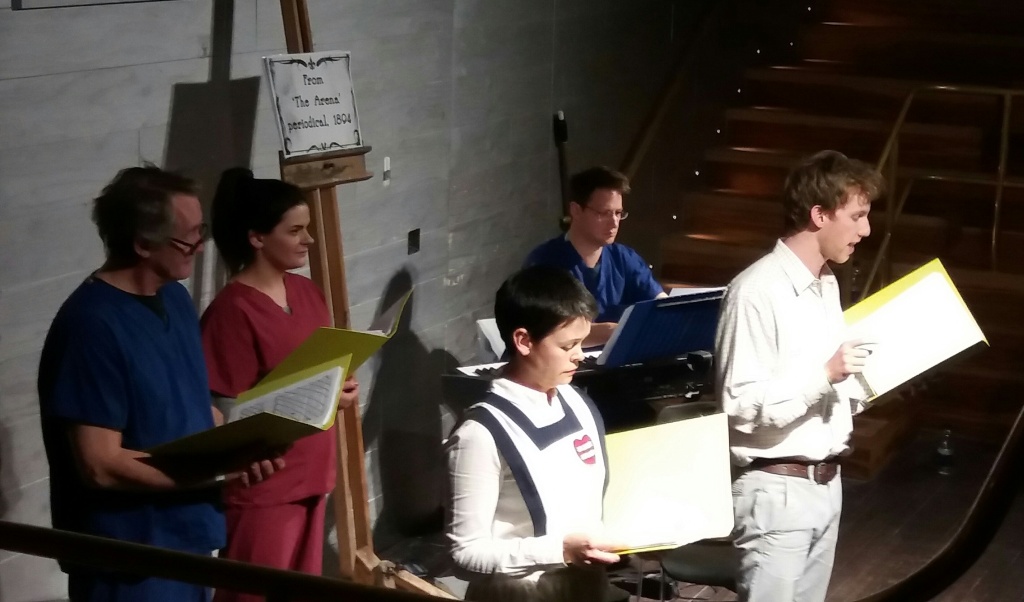 The museum Lates are free, after-hours events, aimed at adult audiences, which take place on the last Wednesday of every month. Each event is themed and last night’s focused on how bacteria develop into superbugs, and the threat of antibiotic resistance.

The museum was filled with hands-on activities, interactive exhibits, and live performances. Visitors joined a barbershop quartet singing about microbial resistance and made their own comic strips about a dystopian, superbug-ridden future. Attendees played the ‘Ultimate Superbugs Race’, emulating bacteria to find out how they evolve to fight antibiotics. Meanwhile, a stall called ‘How Clean is Your Phone?’ offered the daunting prospect of testing the dirtiness of attendees’ personal belongings. Throughout the evening, visitors interacted with scientists, historians, healthcare practitioners, and museum staff, among others.

The Contagion Cabaret was performed three times, in the museum’s intimate Wonderlab Showspace. The Cabaret is the result of a  collaboration between researchers on  the ‘Constructing Scientific Communities’ and ‘Diseases of Modern Life’ projects, together with Professor Kirsten Shepherd-Barr, at the University of Oxford, and the Chipping Norton Theatre, led by Director John Terry. The Cabaret features extracts from plays and music, past and present, which touch on the themes of infection, contamination and contagion.

Last night’s performance included a scene from Eugène Brieux’s play Damaged Goods (1913) which looked at venereal disease and marriage, while readings from twenty-first century newspapers showed how images of contagion have featured in discussions of immigration. The Cabaret combines serious, thought-provoking pieces with plenty of comedic material as well. There were crowd-pleasing performances of ‘The Herpes Tango’ from Fascinating Aida (1999) and ‘Pirelli’s Miracle Elixir’ from Sweeney Todd (1979).

The Cabaret has already had several previous outings, at the Museum of the History of Science in Oxford and The Theatre Chipping Norton. Last night’s was a truncated performance, tailored to the informal atmosphere of the Late.

If you missed previous performances of The Contagion Cabaret, you can catch it* at the British Academy on 24th May. (*Pun intended.) This will be the full-length, two-hour version. To book your free ticket visit: https://www.britac.ac.uk/events/contagion-cabaret.