One of the highlights of an amazing seminar series last term was a paper not from one of the world's leading historians (though we did have two of those) but from animator and graphic artist, Sydney Padua. Seen the new animated version of The Jungle Book? Then you've seen some of Padua's work. So what was a world famous animator at the top of her game doing at St Anne's College, appearing in the Nineteenth Century Science and Literature Seminar Series? Talking about a body of work that had begun as a pet project and ended with a detailed contribution to the history and historiography of Ada Lovelace, Charles Babbage and the Analytical Engine, and a fantastic graphic novel, The Thrilling Adventures of Lovelace and Babbage: http://sydneypadua.com/2dgoggles/the-book/.

Rather than wordifying a brilliantly visual presentation, which reflected on digital sources, visual evidence and materiality, we can present a sketchnote of the talk, courtesy of sketchnote artist extraordinaire (by night), Makayla Lewis (https://makaylalewis.co.uk/). 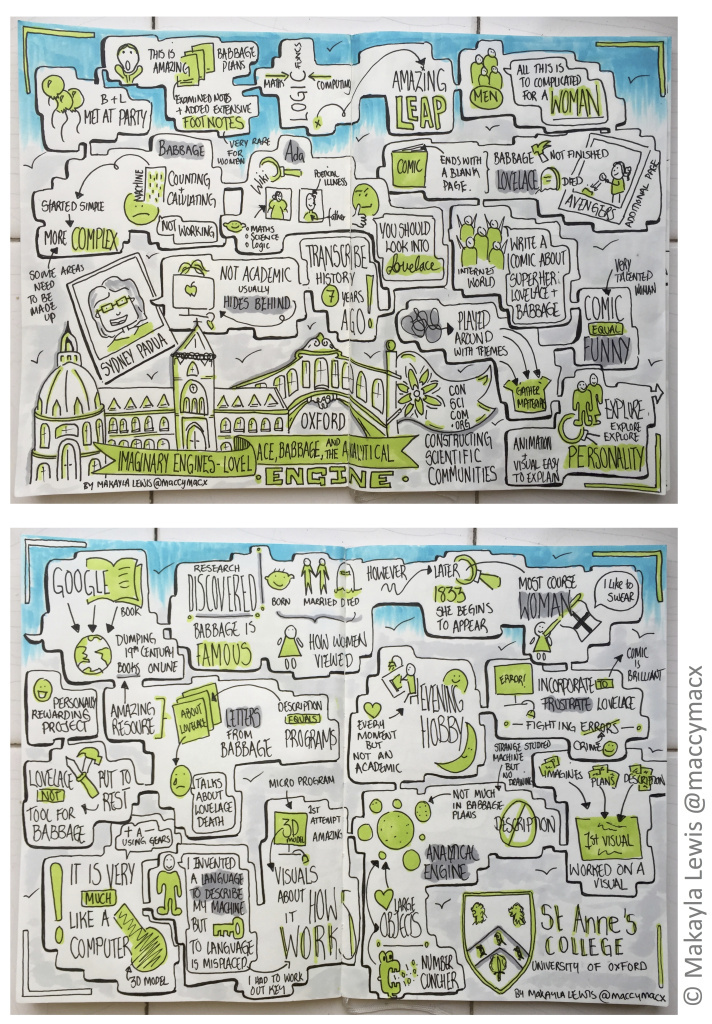 Both Sydney Padua's work and Makayla Lewis's sketchnote demonstrate in spades that the historical enterprise can benefit greatly from the skills of graphic artists. This isn't, however, a case of adding peripheral window dressing to core historical skills in order to package a traditional historical narrative. Padua's work on biography, alternative history and modeling the analytical engine changed the terms of the historical debate. In comparing my scratched out notes of the talk to Lewis's sketchnote something similar happens; the medium shades the message in a new way, revealing new information and opening up new ways of thinking about the presentation.

The turn to visual culture in the history of science is an important strand of the historiography in a discipline which has often focused on text. New projects like www.sciencegossip.org are helping us to understand how 19th century natural scientific images were produced, circulated and used. Padua's models and Lewis's sketchnote show us that producing images can also add to our understanding. So the next time you're in a talk or an archive, why not try drawing it out? And when you're drafting up a project budget, why not include funds for an artist in residence?