On 7 May 2016, Constructing Scientific Communities held a one-day symposium on “People Powered Medicine” at the Royal College of Surgeons of England in London. We are pleased to announce that videos from the day are now available. 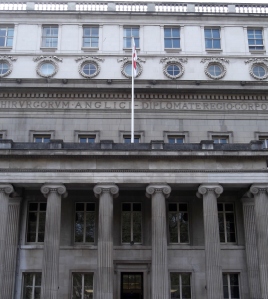 Open to researchers in the medical humanities, medical practitioners, and the general public, the symposium explored patient and public involvement in medicine and healthcare from 1800 to the present. Our aim was to bring together historical and contemporary perspectives to explore relationships between the medical profession and the public, reflecting one of the principle interests of the wider ConSciCom project. During the day, speakers examined challenges to professional boundaries and public contributions to medical and healthcare matters. 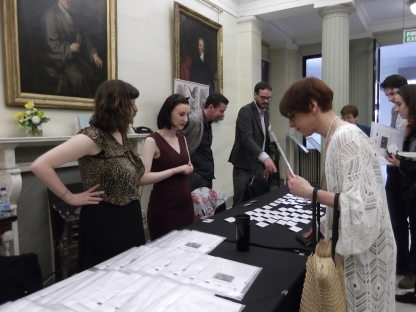 In order to stimulate conversation about changes and continuities in public participation across the period, we decided to structure the day chronologically, with each of the three panels examining a different period.

David Ward – Vice President of the Royal College of Surgeons – and Sally Shuttleworth – ConSciCom’s leader and Professorial Fellow in English at the University of Oxford – began the symposium with a welcome to the RCS and introduction to the ConSciCom project.

ConSciCom is funded by the Arts and Humanities Research Council as part of the Science in Culture theme. The Royal College of Surgeons is an institutional partner of the project, co-hosting the symposium’s conveners, Sally Frampton and Alison Moulds (St Anne’s College, University of Oxford), whose research has employed the RCS’s archives and journal collections. Delegates were also given an opportunity to visit the exhibition “Vaccination: Medicine and Masses” at the Hunterian Museum, which was co-curated by Frampton and Moulds.

The day was split into four panels and two keynote presentations. Each of the panels consisted of two papers followed by questions and an open discussion. Abstracts for each of the papers give an overview of the day’s structure. In organising the symposium, we were keen to invite speakers from different fields – including history, geography, medicine and the social sciences – in order to promote interdisciplinary exchanges about the role of patient and public involvement in healthcare.

To begin the day, historian Ruth Richardson looked at the carer as ‘critical friend’ in the early Victorian period, in the first of our two keynote presentations. She gave a moving reading of an 1840s chapbook written by a father whose child suffered from alleged negligence at the Royal Free Hospital.

The first pair of papers explored patient choice and resistance in the late nineteenth and early twentieth centuries. Kristin Hussey (Queen Mary, University of London) discussed how working-class patients navigated the medical marketplace of late Victorian eye surgery, focusing on an 1893 trial involving itinerant Indian oculists. One highlight of this rich presentation ‘“Don’t you think the Moorfields doctors knew better than this Indian?” Victorian eye surgery, patient choice and the 1893 trial of the Indian oculists’, is Hussey’s account of the remarkable skill involved in cataract removal – whipped out while the patient was distracted – as practiced by the titular Indian oculists.

Hussey is completing a doctoral thesis, ‘Imperial Medicine in the Global City: Exploring the impact of Empire on London’s healthscapes, 1850-1930’, and blogs at the Ministry of Curiosity. Here’s some more from her on the ‘queen of the senses‘.

Then Claire Brock (University of Leicester) talked about interactions between female patients and female surgeons in the field of gynaecology. ‘Patient Resistance in the Early Twentieth Century’, details the historical case notes of several women seeking abortion, or who attempted to self-abort. These are powerful stories of encounters with, and resistance to, the medical experience, all the more so for being presented through the spoken word.

Brock’s paper was drawn partially from work completed during a Wellcome Trust Research Leave Award (2012-2014). This project will be published by Cambridge University Press as British Women Surgeons and their Patients, 1860-1918 (2017). 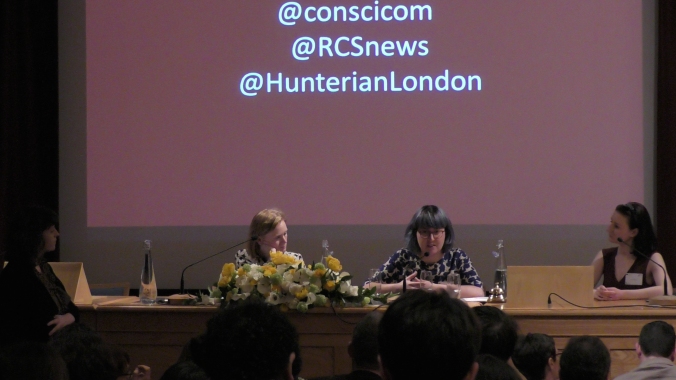 Despite the venue being large and busy the conversations during the question and discussion sessions, and over lunch and breaks, surpassed our expectations. They were wide-ranging, engaged and open. For many of the speakers and participants this was a highlight of the day; being able to speak across fields on a common subject. 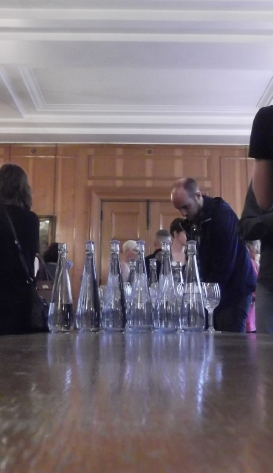 Several responses to the symposium’s themes emerged. Perhaps the strongest was a question of how to think about participation. In the morning’s sessions this was apparent in the lines drawn over who should be allowed to practice ocular surgery and gynecology and how.

This paper relates to Bivins’s prior research project,  Contagious Communities (link to 2015 OUP volume), and, currently, The Cultural History of the NHS, which tweets @NHSHistory_ and hosts the People’s History of the NHS website.

Alex Mold (London School of Hygiene and Tropical Medicine) discussed patient organisations and the genealogy of discourse around health rights and consumerism. In ‘Patient-Consumers? Patient Organisations and Health Consumerism in Post-war Britain’, Mold drew out some of the themes from her recent MUP volume, Making the patient-consumer: Patient organisations and health consumerism in Britain. If patients have too often been ‘ghosts’ in the machinery of the NHS, Mold illustrated that the patient-consumer category is one way in which thinking about patients has been fleshed-out. As many of the papers demonstrated, and Mold specifically indicated, the return of the patient into our narratives of history of medicine serves as more than historiographic corrective; it offers to be the basis of new possibilities in contemporary  health policy and practice.
If the first session of the day raised the importance of patient views and focused our minds on relations between patients and nascent medical professional communities, Bivins and Mold’s papers teased out the ways in which patients related to each other and the wider structures for professional health care forming under the aegis of the National Health Service. 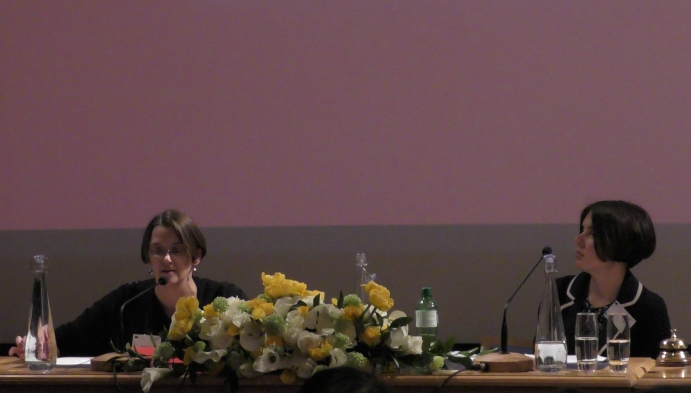 Panel 3. Bodies, Patients and Publishing: Medicine and the Public Today 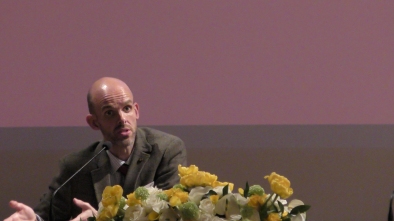 The final panel explored public involvement in medicine today. Tom Gillingwater (University of Edinburgh) talked about his experiences of engaging the public with anatomy demonstrations in ‘Bringing anatomy out of the shadows’. Gillingwater argued for the importance of anatomical knowledge and, ‘opening up the black-box that is anatomy teaching to the public’.  Even as the public is increasingly encouraged to cherish and maintain its bodies, anatomical knowledge is often overlooked. In bringing anatomy back to the public, book-learning can only cover part of the pedagogical ground. However, organising workshops using human cadavers, explicitly without live dissection, was far from straight forward. Interestingly, Gillingwater’s paper demonstrated the extent to which professionals are regulated in their dealing with the public and the ways in which public opinion can be formed by the media. In doing so his paper drew out issues of regulation and the recalcitrance of public opinion. Despite his best efforts, the Burke and Hare narrative was the one several newspapers covering his classes thought would sell the most copy.

In her paper ‘From body-parts to curriculum-setters’, Rosamund Snow (University of Oxford/ British Medical Journal) discussed the changing role of the patient in medicine and healthcare. In particular, she talked about recent initiatives to integrate patient perspectives in the medical press. In 2014, the British Medical Journal launched an innovative new strategy to promote patient-practitioner partnership. This included appointing a patient editor, inviting blog posts from patients, embedding patient review of papers alongside the standard peer review process, and asking authors of educational articles to co-produce their papers with patients. Snow focused on her experiences as the journal’s Patient Editor. She discussed some of the recent contributions made by patients, including the ‘What your patient is thinking’ series, available to read online. Her paper emphasised the important role patient stories can play in influencing clinicians and changing medical practices.

Finally, Christopher McKevitt (King’s College London) interrogated patient and public involvement in the English NHS in recent decades, looking at the role played by the state in his closing keynote: ‘Symbolic acts, strategic gains: patient and public involvement in the English NHS’. McKevitt spoke from a social sciences perspective to recent developments in patient involvement in medical service, delivery and research, building from his own work with patient panels and input into research to a more generalized analysis of the current ‘reconfiguration of the patient’, not least, as a citizen related to the state. On this nexus of the patient, citizen and state McKevitt also spoke from previous experiences of health activism around AIDs in the 1990s contrasting involvement with activism.

The day ended with a reflections panel involving Ruth Richardson, Christopher McKevitt, ConSciCom’s Sally Shuttleworth and Nicholas Markham from the Royal College of Surgeons’ Council, as well as our audience.

Across the day there was a lively twitter discussion under the hashtag #PPM, which we collated into a storify.

The papers, sessions, breaks and virtual spaces of twitter were full of conversation and several responses to our theme of participation. One key figure in our discussions was that of the patient. Another was the institutional figure of the National Health Service, yet another, the state, as source of policy and regulation.

We asked several of our participants what they had taken away from the day; one enjoyed “the breath of participation and the ease of people speaking to each other, they weren’t in their silos”. Another suggested they’d learned about “the locus of power shifting from doctor to patient”. And, in the same vein, from another participant, that it made them think about “how people engage with medicine, on whose terms this takes place”. Lastly one of our participants reports that as well as learning, they were, as a result of the day’s discussions, “even more determined that patient and public involvement is key to how we move forward”.