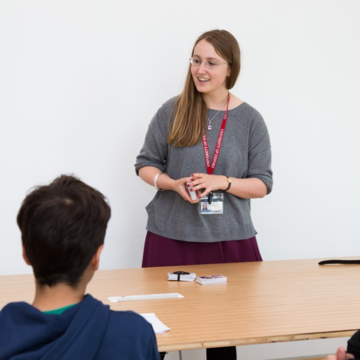 The room is quiet. Groups of students – year ten mostly – have just been given little piles of cards to sort through. Each card has a statement about medicine. Some are current knowledge, some are from medical history, and some are pure fantasy. Their job is to decide which are which.

Suddenly a group at the back burst into embarrassed giggles. They’ve reached card 33: ‘Blowing tobacco smoke into the anus of a semi-conscious person with revive them’.

This short exercise is always followed by animated and enthusiastic discussion, even from students who entered the room with sullen faces. Mind-Boggling Medical History is an excellent ice-breaker. It gets students thinking, as they are forced not only to make a decision – is this statement past, present, or fiction? – but also to justify their choice. The question is not only what do I think, but also, why do I think it?

Mind-Boggling Medical History is a card game developed by Sally Frampton, Sarah Chaney, and Sarah Punshon, and is a collaboration between Oxford’s AHRC-funded project Constructing Scientific Communities (PI Sally Shuttleworth) and the Royal College of Nursing (click here for more information). Sally Frampton joined the Diseases of Modern Life project in 2018, and I’ve been playing the game with various groups, in many different contexts, ever since.

Most commonly, I’ve used it as a taster activity for school groups visiting the University of Oxford. It is impossible, in under an hour, to give groups of 20-30 year ten students – or worse, groups of 50+ year eight students – any real impression of what university teaching is like. But Mind-Boggling Medical History shows them the kind of thinking that university should involve: critical, creative, self-reflexive.

And it shows them something else that has been at the heart of our project – that the strongest thinking is interdisciplinary. As well as school groups, I’ve played the game with audiences of all ages between 8 and 80. Like others who have used the game in similar contexts, I’ve met with a universally positive reception. But by far the most frequent comments are about the medical content. ‘I thought I knew a lot about medicine,’ said a doctor who had just been beaten by his nine-year-old son, ‘but this really makes you think about why we think that we know things’.

I’ve taken the game to the Pitt Rivers Museum as part of the 2017 Being Human Festival; to the 2018 Oxford Science Festival; and to the 2019 St Anne’s Alumni Family Day. We hope that teachers will use it in classrooms, and that it can be utilized as part of nursing training. Because ultimately, it raises questions that are not so easy to answer, however good you are at sorting the cards into their three categories. What do we mean by ‘knowledge’? What is special about how we think today? Who can we trust to tell us the truth? And those are questions that we all need to ask ourselves.