This post is contributed by Etienne Benson, Janice and Julian Bers Assistant Professor in the Social Sciences, Department of History and Sociology of Science, University of Pennsylvania, ebenson@sas.upenn.edu.

On August 31, 1922, Frederick C. Lincoln caught the 8:05am train from Washington, D.C., to Philadelphia and thence to Norristown, Pennsylvania, where he met Theodore A. Gey at his home and manufacturing plant. The two men then returned to Philadelphia, where they inspected a machine that was being built to Gey’s specifications at the Wiedemann Machine Company.

Even in its partially completed state, the machine seemed promising. When finished, Gey told Lincoln, it would be able to produce aluminum bands at a rate of 142 per minute, or 8,520 per hour. “With this machine fully installed,” Lincoln reported after returning to Washington, “Mr. Gey will no doubt be enabled to outbid all competitors for future orders and it is my belief that he will deliver material of a high quality.”

Lincoln’s report of his visit to Philadelphia sounds like that of a middle manager in some industrial enterprise, and indeed, in a way, that is what he was. As the director of the U.S. Biological Survey’s Bird Banding Office, he was responsible not only for recruiting volunteers and preparing reports on the nation’s migratory bird populations, but also for ensuring that the necessary research materials could be obtained at a reasonable price.

I had never thought much about this side of Lincoln’s job until I was invited to participate in a workshop at Oxford in May 2017 on the Material Culture of Citizen Science, which brought together members and affiliates of Constructing Scientific Communities and the working group on Working with Paper of the Max Planck Institute for the History of Science in Berlin. Once I did, though, it became clear that industrial materials and methods were essential to the success of bird banding during this period.

Before the advent of bird banding it was virtually impossible to study the migratory paths of individual birds, for two simple reasons: Humans are rarely capable of moving across the landscape as quickly as birds do, and they usually have trouble distinguishing one bird from another. At the end of the nineteenth century, it was recognized that these limitations could be overcome by recruiting large networks of observers, often volunteers, to attach numbered bands to the legs of birds and to report recovered bands. Since then many millions of birds have been banded, generating insights that have reshaped bird science and conservation.

Bird banding began in the United States in the first decade of the twentieth century, just a few years after the technique was first demonstrated on a large scale in Europe. Formal efforts to coordinate banding on a national scale began in 1909, but it was only after 1917, when Canada and the United States signed a treaty to conserve migratory birds, that the federal government became involved, establishing the Bird Banding Office with Lincoln as its head in 1920.

Over the following years Lincoln worked to create a national program of bird banding with the help of thousands of volunteer banders. As his trip to inspect Gey’s machine suggests, one of his challenges was finding a cheap and reliable source of aluminum bands. Gey already had a flourishing business producing a million-and-a-half bands for pigeon-keepers per year, and he promised Lincoln that he could do better than the Bird Banding Office’s current suppliers. While his pigeon bands were too thick and unwieldy for banding wild birds, he began working on a machine that could mass-produce lightweight, flexible, non-corroding, serially numbered aluminum bands that met the banding program’s needs. 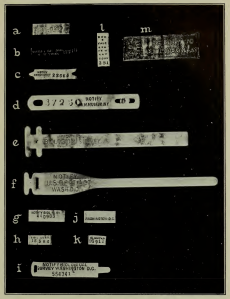 Selection of bird bands used in the United States in the early twentieth century. Bands marked g, h, i, j, and k were in use by the Bird Banding Office in 1927 and were most likely manufactured at Theodore A. Gey’s Norristown plant. (Source: Frederick C. Lincoln, “Bird Banding in America,” Annual Report of the Smithsonian Institute for 1927, Plate 1.)

The task proved to be more complicated than Gey had anticipated, and success ultimately hinged on close collaboration between manufacturer, machinist, and ornithologist. Just over two weeks after his initial visit, Lincoln was back on the train to Philadelphia, where Gey and a machinist were waiting for him with the completed machine. Upon arriving Lincoln saw immediately that the impressions made by the dies that marked the bands with “Biol. Surv.” and “Wash., D.C.,” respectively, were too shallow. After the faces of the dies were ground away from the raised letters, it took the remainder of the day to realign them on the machine.

Lincoln spent the night at Gey’s home in Norristown. When they returned to Philadelphia the next morning, they faced a new problem: The “No. 1” bands intended for use on the smallest birds were being stripped off the machine before they were properly formed. The necessary adjustments took several hours and involved re-machining a broken part. Once that was accomplished, the machine ran perfectly, but the batch of aluminum Gey had bought proved to be unevenly tempered, which made some of the bands too stiff to close properly. Gey arranged to take the aluminum to a friend in Bridgeport for annealing, and Lincoln returned to Washington hopeful that the machine would soon be in order.

These were the kinds of material challenges that faced bird banding in the United States as it was scaled up from a disparate collection of regional efforts to a nationwide program. Their prominence in the records of the Bird Banding Office at the National Archives in College Park, Maryland, where I found Lincoln’s reports of his collaboration with Gey, suggests that bird-banding did not become widespread in the early twentieth century solely for the reasons that historians and ornithologists have usually identified — that is, an increasing scientific interest in bird behavior and ecology, a growing amateur enthusiasm for bird-watching, and an expansion of state responsibility for managing wildlife populations. It was also because materials and methods of manufacturing had become available that rendered banding practicable on a grand scale.

Aluminum bands were not the only materials that mattered in this way. Just as important were the paper technologies that the Bird Banding Office developed to manage the data it received. Between the founding of the office in 1920 and the entry of the United States into World War II in 1941, volunteer banders submitted, on average, more than 200,000 reports of newly banded birds per year and tens of thousands of additional reports of recovered bands, all of which were processed by a small staff of scientists and clerks in Washington. Having successfully mass-produced the tools required for tracking the movement of birds, Lincoln’s next challenge was to manage the overwhelming amount of data that resulted.

The solution again relied on the availability of industrial materials and machines. In the early years of the Bird Banding Office, reports of new bandings and recoveries were submitted on paper forms that were laboriously copied and filed by hand by the clerical staff in Washington. By the end of the 1920s, however, as the piles of unprocessed reports grew and the onset of the Great Depression dimmed the prospects of expanding the office’s staff, the Bird Banding Office shifted to recording data on punch cards that could be sorted and tabulated by machine. Automation did not permanently solve the problem of data overload, but it at least kept the Bird Banding Office from falling even farther behind. 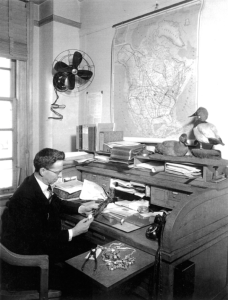 Without aluminum bands, punch cards, and machines for producing and processing them, bird banding would certainly have been possible, but it is unlikely it would have reached the scale it did. Thousands of volunteers were able to participate because they received, at no cost, bands that were lightweight, corrosion-resistant, serially numbered, and easy to handle in the field, and the Bird Banding Office was able to use the data they submitted in large part because it was coded on paper cards that could be sorted and counted by machine. In these ways, bird banding as a nationwide citizen-science program was made possible by industrial materials and methods of mass production. When those materials were in short supply, as they were during World War II, bird banding declined accordingly.

Looking through the lens of material culture, then, it becomes clear that materials mattered to the rise of bird banding in the United States and elsewhere. Aluminum, paper, and machines did not determine the form taken by early twentieth century bird banding any more than smartphones and internet connections determine the form taken by today’s citizen science projects. But we cannot understand the citizen sciences of yesterday or today — their conditions of possibility, their barriers to entry, or the hierarchies of expertise they undermine or reinforce — without paying close attention to the material cultures of which they were and are a part.