I first encountered Jukes de Styrap as the author of The Young Practitioner (1890) – an advice guide for aspiring medical men – when I was researching the early struggles in practice. De Styrap has primarily gained recognition among historians of medicine as one of the major commentators on medical ethics in the nineteenth century. In this blog post, I reveal how he established himself as a spokesperson on a constellation of issues surrounding the pecuniary, social and professional aspects of medical life.

Born in 1815, de Styrap was educated at Shrewsbury School in Shropshire and later at Stourport in Worcestershire. He studied medicine at King’s College London. Like many general practitioners at the time, he was jointly licensed by the Royal College of Surgeons of England and the Society of Apothecaries. He practised in Ireland during the 1830s and 40s, later becoming a licentiate of the Royal College of Physicians of Ireland as well. He then returned to his roots, setting up practice in Shrewsbury. Here he held appointments at the Salop Infirmary and South Salop and Montgomeryshire Infirmary. He founded the Salopian Medico-Ethical Society and acted as its secretary. The Society was subsumed into the Shropshire Branch of the British Medical Association (BMA), on which de Styrap also sat, becoming its President. In 1864, he suffered a severe illness and retired from clinical practice shortly after, standing down as Consulting Physician at the Salop Infirmary.

During his retirement, de Styrap remained actively involved in professional affairs. Firstly, he published The Medico-Chirurgical Tariffs (1874), which supplied practitioners with a recommended fee scale for a range of cases, including those involving advice, medicines, and surgical procedures (from reducing fractures to excising tumours). The guide divided patients into three classes, suggesting that their fee should depend on the cost of their house rental. Thus the recommended price of an ‘ordinary visit’ might range from two shillings sixpence (for the poorest class) to ten shillings sixpence (for the richest). De Styrap advised that night visits (defined as those between 10pm and 7am) be charged at double the ordinary rate (at least).[1] Immediately popular, the Tariffs was translated into French and went into four editions by 1888. The BMJ branded it ‘absolutely reliable’ and suggested it was a valuable reference guide for both younger and more experienced practitioners.[2] 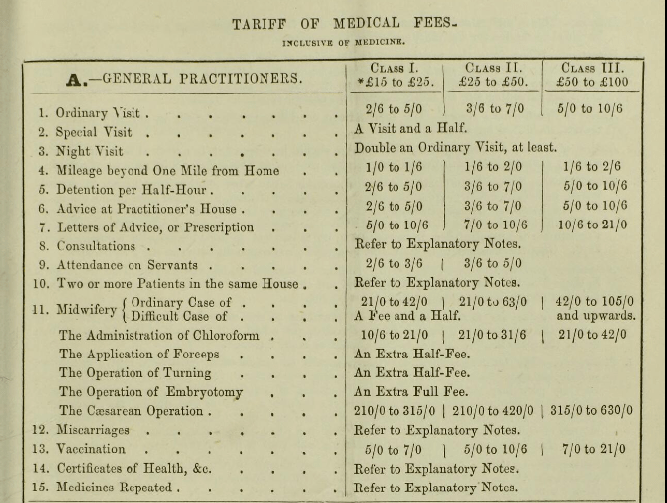 Four years later, de Styrap published A Code of Medical Ethics (1878), which he originally prepared for the Shropshire Ethical Branch of the BMA. The book has since been identified as ‘the only important code of medical ethics to be published in Victorian England’.[3] It drew largely on the American Medical Association’s Code of Ethics (1847), which had already circulated in Britain.[4] However, de Styrap’s reworking also included original introductory material, in which he represented medicine as a ‘sacred’ calling.[5] The AMA’s code was itself based on Thomas Percival’s landmark Medical Ethics (1803), which combined precepts about good conduct with advice on medical jurisprudence.[6]

De Styrap’s hope that the Code would be officially adopted by the BMA was never realised, but – like the Tariffs – it was well-received by the medical community. The BMJ suggested the Code would be valuable for all medical men to ‘habitually refer’ to and praised its ‘stately and old-fashioned […] diction’ which it felt bolstered its authority.[7] The Code was reproduced and enlarged in 1886, 1890 and 1895.

At the age of 75 and with his reputation already well-established, de Styrap published The Young Practitioner (1890). Once again, he drew extensively on existing sources. The book is almost a direct reproduction of Daniel Webster Cathell’s popular American manual Book on the Physician Himself (1881). De Styrap conceded that his book was largely derivative, and framed it as offering ‘modified selections from’ and ‘additions to’ Cathell’s guide.[8]  De Styrap’s major innovations were to adjust the tenets to reflect the context of British general practice and to reframe the advice into a direct address to young practitioners.

Like its ur-text, The Young Practitioner offered advice to medical men seeking to establish themselves in practice. It counselled readers on everything from their dress sense to the arrangement of their consulting-room, their bedside manner to methods for securing payment from reluctant patients. For de Styrap, medical ethics encompassed not simply moral or legal imperatives but one’s manners and behaviour in both social and professional life. Like Cathell, he approached the business side of medical with candour. De Styrap had long been interested in both pecuniary matters and medical ethics, as his earlier works testify. He saw no tension between these different facets of practice; like Cathell, he contended that the business side of medicine, if conducted fairly, was compatible with a respectable and gentlemanly profession.

Once again, de Styrap’s work was praised by contemporary medical journals. It was regarded as an important contribution to medical ethics rather than a product of plagiarism. The Edinburgh Medical Journal fleetingly mentioned de Styrap’s debt to Cathell but enthusiastically praised his emphasis on gentlemanly conduct.[9] The BMJ remarked that,

[t]he standards which [de Styrap] sets up for our conduct towards the public and towards each other is perhaps almost too high; but though it may be beyond the attainment of all men at all times, yet it is well that the standard would be put high.[10]

Following the publication of The Young Practitioner, de Styrap was increasingly confined to his home in Shrewsbury due to ill-health. He died there at the age of 84 in 1899. Announcing his death, the Lancet credited him as the ‘well-known author of “A Code of Medical Ethics”’.[11] A longer obituary in the BMJ described how this guide had ‘been of great assistance to the profession’.[12] Over the years both journals had recommended the book to correspondents who asked for a reference guide on medical ethics.[13] Meanwhile, the BMA adopted a resolution expressing ‘great regret’ at de Styrap’s death and acknowledging his ‘long connection with the Association and the interest he took in raising a high standard of professional duty’.[14] De Styrap’s career demonstrates how a medical man could develop his professional identity through his writing even after stepping back from active practice.

Questions of originality and authorship perhaps trouble us more than de Styrap’s contemporary readers, who recognised him as making an important contribution to the profession. His high-minded tone and attention to detail were well-respected and his commitment to setting and elevating standards was seen as crucial to regulating professional life. As historians have identified, de Styrap borrowed the language and recycled the tenets of earlier medical ethicists. This approach, and the enthusiastic reception of his work, reveal how ideas about good medical conduct remained remarkably stable for much of the nineteenth century.