During my thesis, one of my major research interests was medical men and women who produced literature. While some of these authors (such as Arthur Conan Doyle and W. Somerset Maugham) remain well-known today, others have faded into obscurity. I came across Henry Martineau Greenhow while researching fiction about medicine in India. He was a surgeon in the Indian Medical Service who later drew on his experiences to pen fiction about Anglo-Indian life.

Greenhow was born in 1829 to a prominent family. His father, Thomas Michael Greenhow, was an illustrious medical man, who co-founded Newcastle’s Eye Infirmary and the Newcastle University Medical School. Thomas worked at the Newcastle Infirmary (later the Royal Victoria Infirmary), and was crucial during its expansion. Thomas was married to Elizabeth Martineau, sister of the political and social theorist Harriet. Thomas and Elizabeth also had a daughter, Frances, Henry’s older sister. Frances would become known for her efforts to open up educational opportunities for women.

The young Greenhow became a student at the Newcastle School of Medicine in 1848 and at University College London in 1849. Four years later he became a Member of the Royal College of Surgeons of England. In January 1854, he entered the Indian Medical Service (IMS) on the Bengal side as an Assistant Surgeon. Three years later he served during the Indian Rebellion. He was part of the original garrison at the Siege of Lucknow, where he aided several wounded soldiers from the relieving force, for which he was promoted and awarded the Mutiny Medal with two Clasps and furlough for eighteen months counting as service. During furlough, he became a Fellow of the surgical Royal Colleges of England and Edinburgh. Greenhow was also promoted to the Brevet rank of surgeons, in recognition of his services at Lucknow. He became a Surgeon Major in 1873, before he retired three years later.

During his retirement, ‘he tried his hand at literature’, as his obituary in the British Medical Journal (BMJ) attests.[1] He published several novels of Anglo-Indian life, including The Bow of Fate (1893) and Brenda’s Experiment (1896), which was designed to tap into contemporary tastes. In an article for Blackwood’s, journalist Hilda Gregg described how there was a ‘flood of Mutiny literature’ in the 1890s. She wrote, ‘[o]f all the great events of this century, as they are reflected in fiction, the Indian Mutiny has taken the firmest hold on the popular imagination’.[2]

Brenda’s Experiment follows a young British woman, Brenda Mogadore, who marries a Muslim man, Ameer Ali. The novel’s title reflects how interracial marriage is framed as an ‘experiment’ trialled by Brenda and her bohemian parents. It proves to be an ill-fated match. While Ali initially presents himself as a liberal-minded convert to Christianity, this turns out to be a ruse. After settling his new wife in Rownpore, he reveals his true nature, introducing a second wife to the home and promising Brenda as a gift to his high-status cousin, the Nawab (the figurehead of the ‘Mutiny’). Reviewing the novel, Hearth and Home noted that, while the narrative was ‘readable and entertaining’, Greenhow had made ‘the Oriental’ (Ali) ‘such a brute that no woman could have been happy with him, whatever his race, rank, or religion’.[3] Similarly, the Speaker deemed the book ‘readable and interesting’, but complained that ‘we should like [...] to meet in fiction with a Mahomedan who was not a villain’.[4] The novel’s treatment of race is crude and unpalatable, and I was intrigued to find that nineteenth-century reviewers were similarly frustrated by its Islamophobia.

Greenhow repeatedly deploys common Orientalist tropes, particularly in his representation of Muslim men as cruel and untrustworthy. Many of the Sepoys in the Rownpore Rangers – save for the loyal and courageous Sikhs – prove treacherous, and the ringleaders murder their British officers in gruesome and unprovoked attacks. Dillawur Khan attacks an unarmed Captain Wright, slitting his throat and then carrying his head on a stick as a ‘hideous trophy’.[5]

The novel’s title page identified the author as ‘Surgeon-Major Greenhow’, thus establishing it as the work of a medical man. While medical practice does not feature heavily in the narrative, Greenhow depicts two colonial medical men: the retired Dr Barton, a family friend of the Mogadores who returns to London after a lengthy career in India, and Assistant Surgeon Bolton, who helps the British military in its defence of the Residency. Barton warns Brenda’s parents not to trust Ali, and rigidly believes in ‘racial distinctions’. While Mogadore hopes that his daughter's marriage will show that ‘the narrow limits of race are falsely drawn by the narrow prejudices of mankind’ (41), Barton remains convinced that the ‘mixture of certain races should be avoided’ (30). His advice stems from his position as doctor and family friend. Similarly, Bolton plays a minor but crucial role. He confronts and arrests the Nawab, restoring order to the colonial outpost. Greenhow positions a character of his own former rank as a military hero.

During his retirement, Greenhow lived at Esher in Surrey, where he died at the age of 83 on 26 November 1912. He was the last survivor of the medical officers who took part in the defence of the Residency. The Lancet printed a small obituary which recorded his service during the Rebellion,[6] while a longer obituary in the BMJ recalled both his military service and his literary activities.[7] 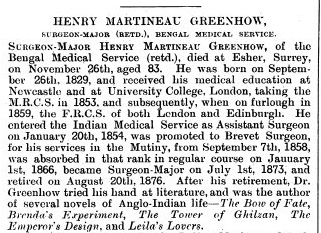 It is unsurprising that Greenhow’s rather crude and distasteful narratives have not secured him longer-lasting literary recognition. Yet his decision to take up a pen after a prestigious military medical career is fascinating, showing the appeal that literary activity held for the medical profession at this time.