Hardwicke's Science-Gossip: an Illustrated Medium of Interchange and Gossip for Students and Lovers of Nature (1865-93) 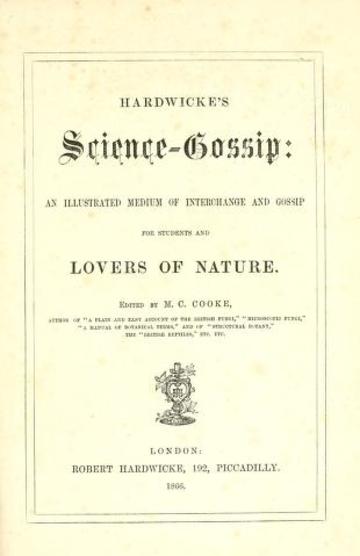 Hardwicke's Science-Gossip took the first part of its title from Robert Hardwicke (1822-75), who was a prolific publisher of scientific books and journals. He joined forces with the mycologist Mordecai Cubitt Cooke (1825-1914), who became the periodical's first editor. Cooke originally suggested the Veil of Isis as a title for the magazine, but was eventually persuaded that Science-Gossip was a name more likely to prove popular with a wide readership. As the term 'gossip' suggests, the tone was intended to be friendly and conversational, much like talking to a friend or acquaintance with a shared interest. Cooke defended 'gossip' from associations with triviality, 'our aim is to gossip freely, in as untechnical a manner as possible', therefore allowing 'those of our readers who have not had a scientific training' to read it 'with pleasure and understanding'. In 1872, Cooke and Hardwicke parted ways, and the science journalist John Ellor Taylor (1837-95) took over as editor, though the overall style and content of the periodical remained consistent with these founding principles. 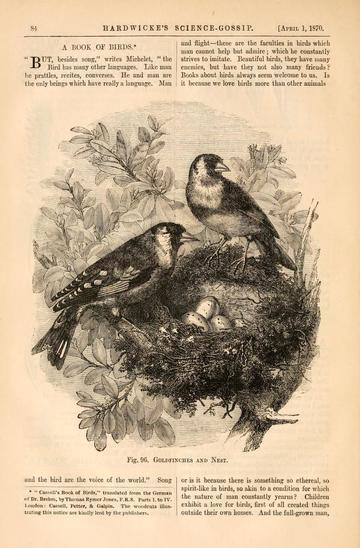 Science-Gossip followed the model of another periodical, Notes and Queries (1849-present), a weekly publication in which antiquarians and scholars exchanged information and answered each other's questions regarding folklore, literature, and history. Science-Gossip similarly encouraged its readers to become contributors, submitting their own observations and asking for help in identifying and understanding what they had seen. This formula proved highly successful, at least according to Cooke, who wrote in the preface to the first collected volume that the flood of correspondence they received was 'sudden and almost overwhelming'. This claim was apparently not much of an exaggeration, as Science-Gossip continued to publish letters from its readers and enjoyed a lifespan far longer than most other science periodicals of this period. A typical page of such notes from the year 1867 includes a sighting of the first swallow on 5th April, a reply to a question regarding the spawning of frogs, and two different methods for removing dust from aquaria of the kind kept by many Victorian households.

Robert Hardwicke died in 1875, but the periodical retained his name until 1893, when it was purchased by the zoologist John T. Carrington (1846-1908). Under the editorship of Carrington, it continued until 1902 as Science-Gossip, though in significantly different form. It is not clear why it was discontinued, but it is most likely to be the result of falling sales. 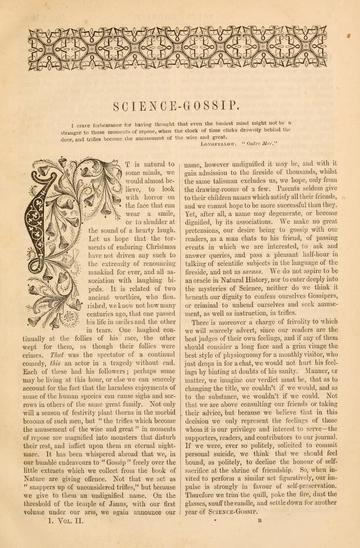