Frederick James Gant first appeared on my research radar when I was examining attitudes towards women in medicine. In 1892, the British Medical Association (BMA) debated whether to admit women as members. Gant spoke passionately in support, noting that – though he had initially been unsympathetic to the cause – he felt medical women had acquitted themselves creditably. He argued that there could be ‘no doubt’ as to their ‘professional, social, and moral character’.[1] The BMA eventually voted in favour and Gant’s intercession may have exerted an important influence. He was a well-respected figure; his 1905 obituary in the Lancet recorded his ‘prominent position among London surgeons’ and that he was ‘well known as an industrious author’ on medical and non-medical matters.[2]

Gant was born in 1825 in Kingsland, London. His father was a military man; Lieutenant Colonel John Castle Gant of the King’s Own 2nd Light Infantry. As he would later record in his autobiography, the young Gant was a premature child ‘of puny body and weakly health’. He was sent to Eastbourne and then Hastings where he ‘acquired an intense love of nature and eventually more than average strength’, as the BMJ related in his obituary.[3]

Returning to London, Gant was educated at King’s College School. After losing his parents, he became assistant to a pharmaceutical chemist in Shoreditch. At the age of 16, he entered University College London as a medical student. He became a Member of the Royal College of Surgeons of England (RCS) in 1849 and would later become a Fellow (1861).

Gant began his medical career in relatively ‘straitened circumstances’ but conditions soon improved.[4] He took rooms in Old Cavendish Street and in 1852 began practising as a consulting surgeon. He also lectured at the short-lived Hunterian School of Medicine on Bedford Square, first on physiology and then on anatomy too. When the school closed, Gant moved (along with the students) to the Royal Free Hospital. The Royal Free was not recognised as a school by the RCS since its anatomy and pathology museum was deemed ‘insufficiently equipped’.[5] Although the students transferred to Middlesex Hospital in 1854, Gant remained as Surgeon to the Royal Free and worked to improve its museum.[6] 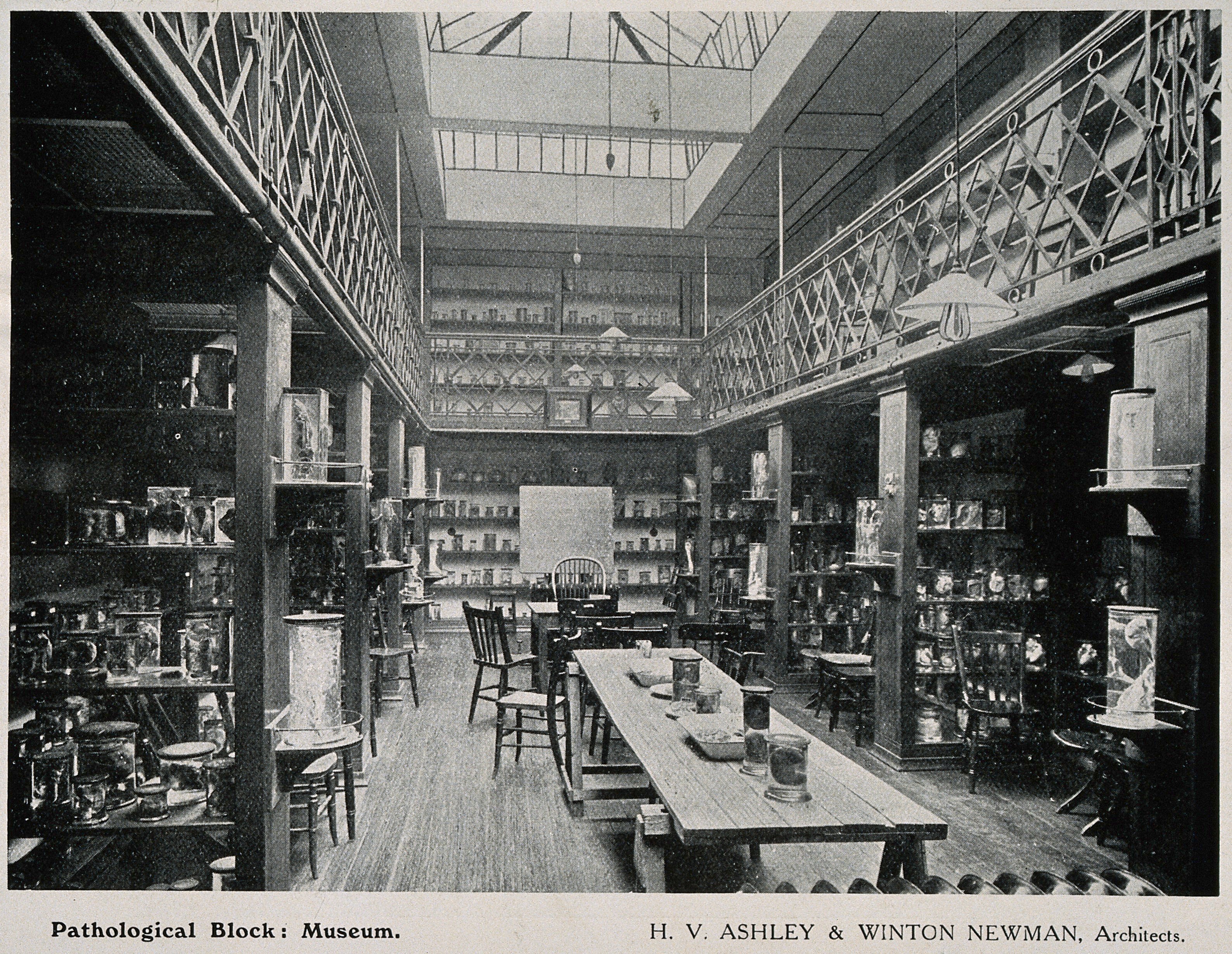 In the last year of the Crimean War (1853-6), Gant acted as Civil Surgeon in the military hospitals in the Crimea and at Scutari, and he received a medal with a clasp for Sebastopol. He returned to England in May 1856, after a severe illness.

His first book followed soon after. It was inspired by a casual visit to the Smithfield Club Cattle Show in 1857, where he was struck by the obesity of the animals on display. The Evil Results of Overfeeding Cattle: A New Inquiry (1858) demonstrated that the cattle’s tissue had undergone fatty degeneration, indicating that prizes were being given for bulk and weight of fat over the quality of the meat. Gant’s report attracted letters of thanks from leading exhibitors and breeders, including the Prince Consort and the Duke of Richmond.[7]

Throughout his career, Gant published widely. His work on the Principles of Surgery (1864) spawned two later editions. The 1871 version contained one of the earliest notices of antiseptic treatment found in any work on surgery. The BMJ suggested it was the earliest, though this claim was queried by the Lancet.[8] This material was written from monographs sent by Professor Lister at Gant’s request. Gant also produced Diseases of the Bladder, Prostate Gland, and Urethra (1876); The Student’s Surgery (1890); and a Guide to the Examinations by the Conjoint Board in England and for the Diploma of the FRCSEng (1874), which reached seven editions by 1889. The BMJ’s reviewer was sceptical about whether students should rely on such guides rather than proper tuition, but acknowledged the ‘large demand’ for the book.[9]

Gant was also a frequent contributor and correspondent to the medical press, offering clinical lectures and letters on issues such as affairs of the RCS Council.[10] At one point, he wrote in defence of his own ‘professional honour’ in reference to an intraprofessional dispute.[11] Gant was also active in professional societies. He was President of the Medical Society of London in 1880-1 and was for two years Vice-President of the Royal Medical and Chirurgical Society.

Gant’s professional life was rich and varied. Around 1877 he became medical attendant to two famous pedestrian-athletes; the Canadian E. Payson Weston and the Welsh William Gale, both of whom won fame for the huge distances they walked. Gant tended to both during their public performances.[12]

Gant also wrote a diverse range of non-medical works, and it was this literary activity (and its reception by the medical press) that piqued my interest. The novel Perfect Womanhood (1895) follows the struggles and romantic adventures of a young medical man, and like its sequel The Latest Fruit is the Ripest (1898) it was semi-autobiographical. The Lancet praised the former for its ‘genteel’ female characters, reassuring readers that they would encounter ‘no woman with “views”’.[13] Perfect Womanhood was reviewed alongside another work of fiction by a medical man – Arthur Conan Doyle’s semi-autobiographical novella, The Stark Munro Letters (1895). Gant's later work, The Lord of Humanity, Or the Testimony of Human Consciousness (1899), was a ‘statement of personal religious convictions’ which was received positively by the BMJ.[14] Mock Nurses of the Latest Fashion (1900) was a collection of short stories which lampooned nurses. It was written during a period of suffering and Gant’s BMJ obituary opined that this might have ‘coloured the author’s perception’ and ‘led to his sweeping denunciation of the entire profession because of the few examples with which he was brought into contact’.[15]

Gant continued working as senior surgeon to the Royal Free Hospital until 1890 and during his final 12 years he was involved in training early cohorts of women doctors. From 1878, students at the London School of Medicine for Women joined clinical training at the Royal Free. By his own admission, Gant was not originally in favour of the movement for women’s medical education but he revised his position through his observations and experiences. When he spoke in support of medical women at the BMA’s meeting, he claimed to know ‘something not only of their intellectual qualifications, but of their social and moral character’. His desire to defend them across all fronts illustrates the obstacles they faced in gaining professional recognition. Gant said that he had initially thought they might ‘seek to enter the profession upon the easiest terms’ but he reflected with admiration that they had ‘taken the hardest road in nearly every instance’. He dismissed the fact they had not yet been admitted by the RCS, describing it as ‘a slow-going machine […] old and rickety’. Moreover, he concluded it was ‘a waste of time’ to discuss women’s admission since the BMA could not ‘exclude any body of legally-qualified practitioners’. He asserted that he spoke not only as the women’s former teacher but because it was ‘a matter of right and justice’.[16] It is interesting that a medical man whose literary treatment of women was rather conservative had acted as a passionate defender of women’s rights within the profession.

Gant’s somewhat saccharine romantic tendencies might be traced to his personal life. In 1859, he married Matilda Crawshaw, who later inspired the character Mabel Carlton in Perfect Womanhood. Mabel is the wife of a young practitioner and the romance plot borrows heavily from Gant and Crawshaw’s own courtship. They were married for 40 years before her death in 1899 and they had a son who died in infancy. Both the Lancet and the BMJ’s obituaries emphasised the couple’s devotion and the former added that Matilda's death came as a ‘serious shock’ to Gant.[17]

During his final decade, Gant’s health deteriorated. His BMJ obituary was remarkably graphic about his illness, detailing that he underwent lithotrity, a surgical procedure breaking down large calculi, and that he required daily catheterisation for some years. By this point, Gant had retired from active medical work but he maintained his ‘literary pursuits’.[18] Several months before his death he released an Autobiography. The Lancet’s review commended the author on setting forth his private and public life in a ‘modest and graceful way’.[19] 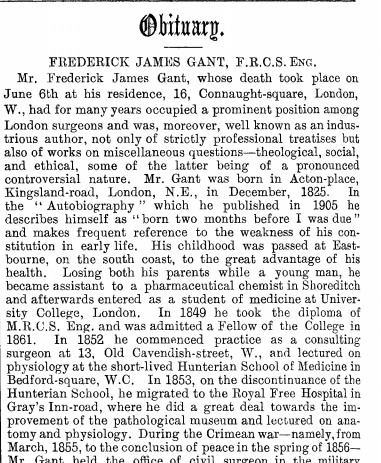 He died at the age of 80, from pneumonia, at his home in Connaught Square in June 1905. The funeral took place in Richmond, Surrey where he was buried with his wife. He had placed the following words on her tomb: ‘To the unspeakable distress of her husband, his age and bodily affliction debar him from ever visiting her grave, at a distance of ten miles from London’.[20] The way in which this was recalled by the medical press shows its interest in humanising an eminent medical man.