In browsing many natural history periodicals of the nineteenth century, a casual reader could be forgiven for believing that science was pursued predominantly by men. The overwhelming majority of contributors to these publications were male, and even the few mentions of women involved in collecting are often mediated through their husbands or other male relatives. A Mr J. P. Duncan wrote to the Entomologist's Weekly Intelligencer in 1858 to relate that, 'Mrs Duncan captured, yesterday afternoon, a fine female specimen of what I conceive to be Micra ostrina'. The identity of the unfortunate Mrs Duncan is elided, and although she is rightfully credited with catching the insect, it is her husband who identifies the species and assumes responsibility for informing the periodical's readers.

Despite the preponderance of men in these periodicals, women were heavily involved in the practices of natural history, though evidence of their roles can sometimes be harder to come by. Some of us will be familiar with the pioneering figure of Eleanor Ormerod (1808-1901), who earned widespread recognition among the scientific establishment for her work on injurious insects. Far less well-known, however, is Emma Hutchinson (1820-1906), who was an important and highly-valued figure within the entomological community. Born Emma Gill, in 1847 she married the Reverend Thomas Hutchinson, a Herefordshire-based vicar and keen botanist. It was the couple's eldest son who first turned his mother's attention to the pursuit of entomology, when he caught a moth at the age of five. Thereafter, Hutchinson took to the study of insects with an enthusiasm and dedication far beyond many of her contemporaries.

Hutchinson became particularly skilled at the breeding of Lepidoptera, a very difficult task that required dexterity and close attention. While chasing butterflies with a net was certainly a common practice, rearing insects from the egg was an equally established way of acquiring specimens. It ensured the insects were in excellent condition, as identification of species could often rest on minute anatomical differences that were at risk of damage by the less gentle manner of catching them on the wing. Furthermore, it allowed for a more exhaustive study of these insects, giving the breeder a chance to observe the full lifecycle of the butterfly or moth as it progressed from caterpillar to the adult (imago) stage.

Among Hutchinson's greatest claim to fame was her continuous breeding of Eupithecia insigniata - the Pinion-spotted Pug moth - for over thirty years. In volume 8 of William Buckler's book, Larvae of the British Butterflies and Moths (1899), the author notes that 'towards the end of May, 1868, Mrs Hutchinson, of Grantsfield, kindly sent me seven eggs of Eupithecia consignata, laid by a female taken in Herefordshire by her daughter. They all hatched in the course of a few days'. Buckler notes that this was an 'almost unknown larva', thereby making Hutchinson's contribution particularly valuable. 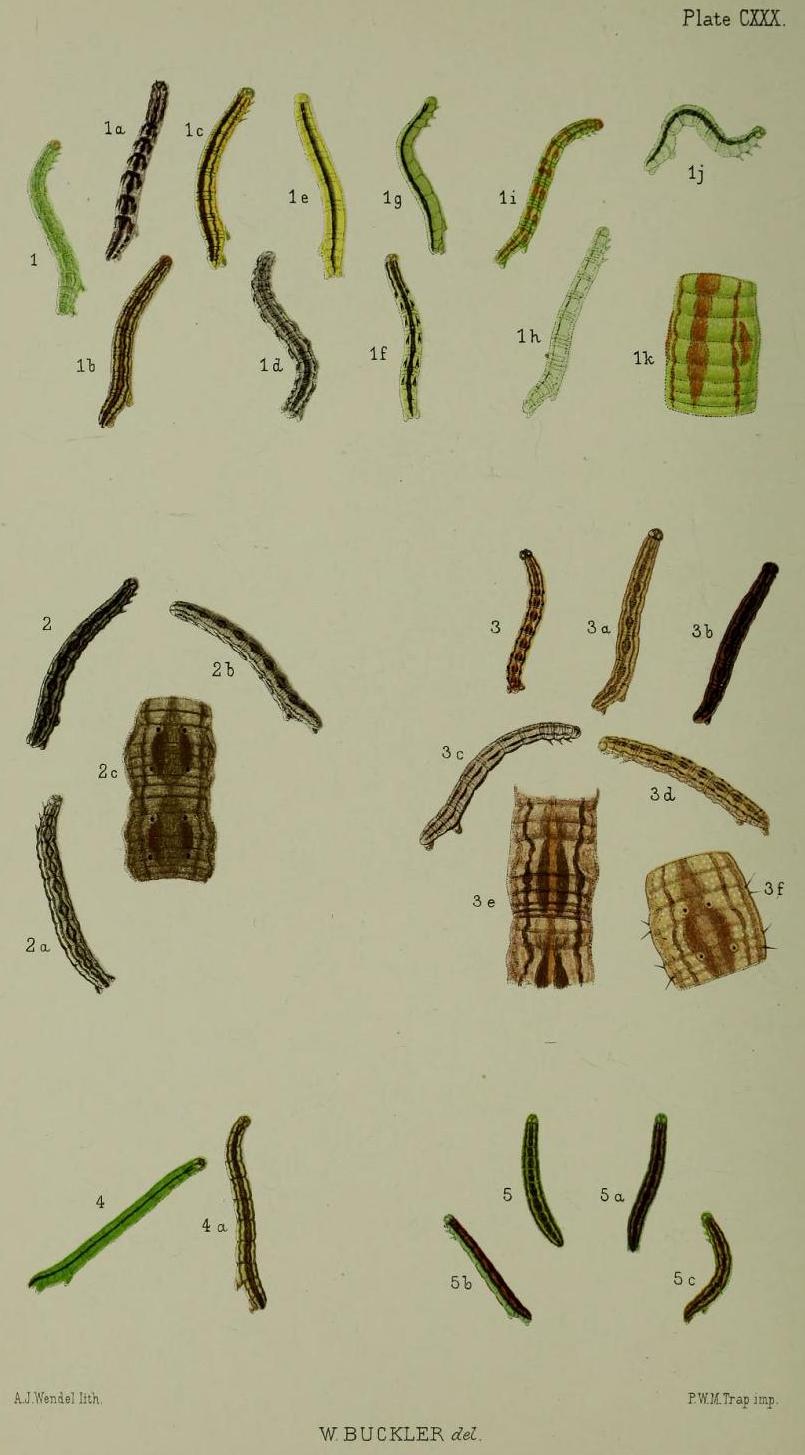 Despite her obvious skill and expertise, Hutchinson published very little compared to her male counterparts, nor was she permitted to join her local scientific society, the Woolhope Naturalists' Field Club, which did not admit women as full members until 1954. Consequently, one of her earliest publications in the club's Transactions is attributed to 'the family of Rev. Thos. Hutchinson'. Hutchinson's obituarist in the Entomologist's Record and Journal of Variation lamented that 'she has left record of so little of her knowledge', and ranked her among the foremost entomologists in the country at that time. However, she did contribute various short notices to two periodicals, the Entomologist (1864-1973) and the Young Naturalist (1879-90), recording her entomological activity.

Writing in 1865, Hutchinson recorded a successful collecting trip: 'I shall be obliged to announce in the Entomologist the capture of Cerestoma asperella at Leominster. I believe this insect has only been taken once before in this country, and then by Mr Dale at Glanvilles Wootton. I have taken but a single specimen, and on the same day a lady in our party netted a specimen of Sarothripa revayana, an insect not previously taken here'. The published letter was signed 'E. S. Hutchinson', giving no clue as to her gender. This brief statement is highly suggestive, as it demonstrates an in-depth knowledge of Lepidoptera and an ability to correctly identify these insects, but also a familiarity with entomological literature regarding where and by whom previous captures had been made. Furthermore, the reference to a second woman collecting as part of the group demonstrates that Hutchinson was far from unique in her choice of pastime.

Among Hutchinson's few publications of greater length was an article in the Young Naturalist. As the periodical's title implies, the magazine aimed to 'cultivate a taste for natural history' among children and adolescents. Hutchinson's piece was entitled 'Entomology and Botany as Pursuits for Ladies', specifically addressing young ladies in an attempt to convince her readers that these two branches of study were 'strictly feminine' and worth their time. The conversational style resembles the 'maternal tradition' of science writing, as characterised by Bernard Lightman, by which women wrote for an audience of children and other women. Unlike her letters to the Entomologist, the article was signed as 'Mrs Hutchinson', thereby emphasising that she was a woman and a mother.

A further significant article penned by Hutchinson for the Entomologist in 1881 regards the supposed near-extinction of the Comma butterfly (Vanessa c-album) in Britain, as had been repoorted by a number of other correspondents to the periodical. She disagreed, reporting that the butterfly remained abundant in her native Herefordshire. Furthermore, Hutchinson relates her attempts at conservation, describing how 'I have bribed those over whom I have control in the parish to collect for me every larva and pupa they can find, and by this means have preserved many thousands of this lovely butterfly'. A great number of these insects she sent to be released in Surrey, in an effort to repopulate depleted areas, 'but without success'.

After Hutchinson's death, her scientifically valuable collection of 20,000 Herefordshire Lepidoptera were donated by her daughter to the London Natural History Museum, a testament to the scope and significance of her collecting. She is remembered in entomological nomenclature by a variant form of the Comma butterfly, which is named hutchinsoni in her honour. 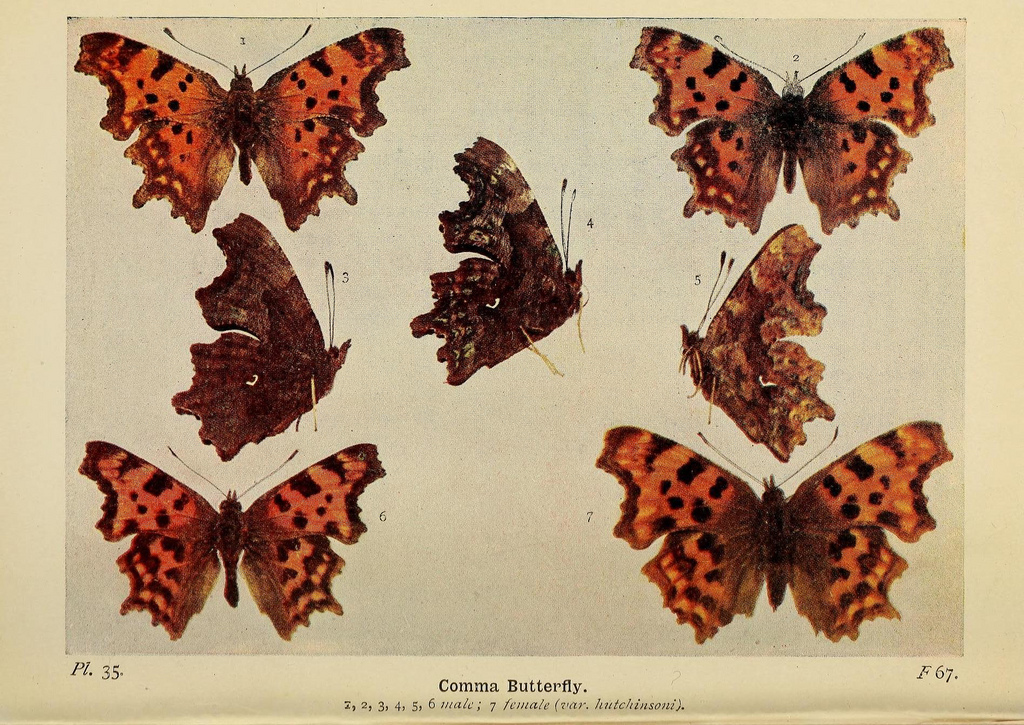 The Comma butterfly, from Richard South's Butterflies of the British Isles (1906). The variety named after Hutchinson, which is slightly paler than the other forms, is bottom right.