“Dressing up” Research: Impact and Public Engagement, Past and Present

With the rise of the ‘Impact’ agenda in contemporary Britain, and the requirement that researchers show how their work has influenced a wider public, a new breed of expert has sprung up — the writer of “impact case studies”, and popular accounts of research. Such beings are employed by university departments to magically transform the leaden prose of academics into engaging, easily accessible text. Small independent companies have emerged, offering their services to research grant holders, with promises of wide international dissemination, and the ability (to paraphrase the famous beer ad) to engage audiences other media cannot reach. The idea that scientists and researchers more generally should engage with the general public is of course not new.

Even the idea of a specially trained mediator has deep roots. In 1928 the journal Public Health (which had started life in 1888 as the journal for Medical Officers of Health), carried the text of a lecture delivered to the Northern Branch, by Daniel Polson, editor of The Evening Chronicle, Newcastle-upon-Tyne, advising members on how to use the press to further their work and to reach the general public. “Progress,” he argues, “is impossible without publicity” and “[o]ne of the most remarkable developments in press life in recent years is the system of what is called ‘making the press,’ and of using the press for the furtherance of outside policies.”[1]

Although there were long traditions of scientists using the press for publicity or political purposes, what Polson is alluding to here is a new self-conscious awareness on the part of professionals of the need to be seen in the media.   Polson suggests it is the Medical Officers of Health civic duty to use the press: “After all, we are governed by public opinion, and public opinion cannot govern unless it is well informed.”   Such a requirement should not be too daunting since there were “many ways in which medical news can be dressed up to make interesting, and at the same time, informative reading for the lay mind.”   Polson hastens to reassure his audience that medical officers themselves need not do such “dressing”; they were required simply to make their contributions as easy to read as possible, and then leave it to be “dressed up by men who are trained to produce the finished article in a way which will attract the eye and the brain.”[2] By placing themselves in the hands of the professionals, medical men could reap the rewards of high quality visual presentation, and enticing, accessible prose.

The responses of the assembled doctors were largely favourable, although there were worries about “stunts” being pulled; as one doctor commented, “A medical officer of health had only to say something sensational, and it would appear prominently in the press.”   There were also concerns that junior doctors might try to use newspapers to generate publicity for their work, in order to obtain undeserved promotion.   Such anxieties about “self-advertisement” link back to the debates of the late nineteenth century when (as forthcoming research on this project by Sally Frampton will show), the medical colleges attempted to prevent their members from writing in popular medical journals, amidst concerns that such writing could undermine the new-found status of the profession.

In the sphere of public health this created a particular tension: the development of preventive medicine depended on the success of medical officers and other interested professionals in engaging public interest, and shifting individual and institutional patterns of behaviour.   From the 1850s onwards, Sanitary Associations were set up in towns across the country, and there were many hectoring, and patronising pamphlets produced.   Not all attempts at reaching out to public audiences were so misjudged, however.   The meteorologist G. J Symons, who created a wonderfully non-hierarchical network of over 3000 rainfall observers (see http://journal.sciencemuseum.org.uk/browse/issue-03/old-weather/) was also exceptionally active within the national Sanitary institute.   In his 1879 address to the annual Sanitary Congress, as President of the Meteorology, Geology and Geography Section, he stresses the need for engaging the public, and anticipates the sceptics’ questions: “what is the use of making three days of it, and having a lot of dry scientific papers of no use to anybody, and incomprehensible by any but dreadfully scientific people?”[3]   His answer is a firm rebuttal of this view. There is no such thing, he argues, as a separation between “science and practice” and he goes on to show how meteorological understanding is fundamental to daily life, from ventilation in theatres to the positioning of houses. His vision is of a general public deeply engaged in issues of health and the environment, and willing to give their own time to help record and improve their environmental surroundings.

Perhaps the most successful vehicle for engaging the public with issues of public health was the publication by the Leeds surgeon and sanitary campaigner, Thomas Pridgin Teale, Dangers of Health: A Pictorial Guide to Domestic Sanitary Defects. First issued in 1879 it went through various editions and was translated into multiple languages (including into German by Queen Victoria’s daughter, H. R. H. Princess Christian).   W. H. Auden later recalled that it was one of his favourite books in his ‘Nursery Library’ (and he lamented that he had lent his copy to John Betjeman twelve years previously and it had not yet been returned).[4]   Teale’s work arose out of a lecture he had given at the Leeds Philosophical and Literary Society in 1877, and such was its subsequent popularity, he decided to work with a Leeds artist, G. W. Foster, to produce an illustrated guide to sanitary defects that might be found in the home.   Although it sounds potentially deathly, the book is deliberately comic (in part), with each defect accompanied by anecdote and illustration, from the overtly farcical to the wryly humorous.   The young Auden was perhaps captivated by the tale of the butler who failed to appear with the wine, because he had fallen into a disused cesspit in the cellar. 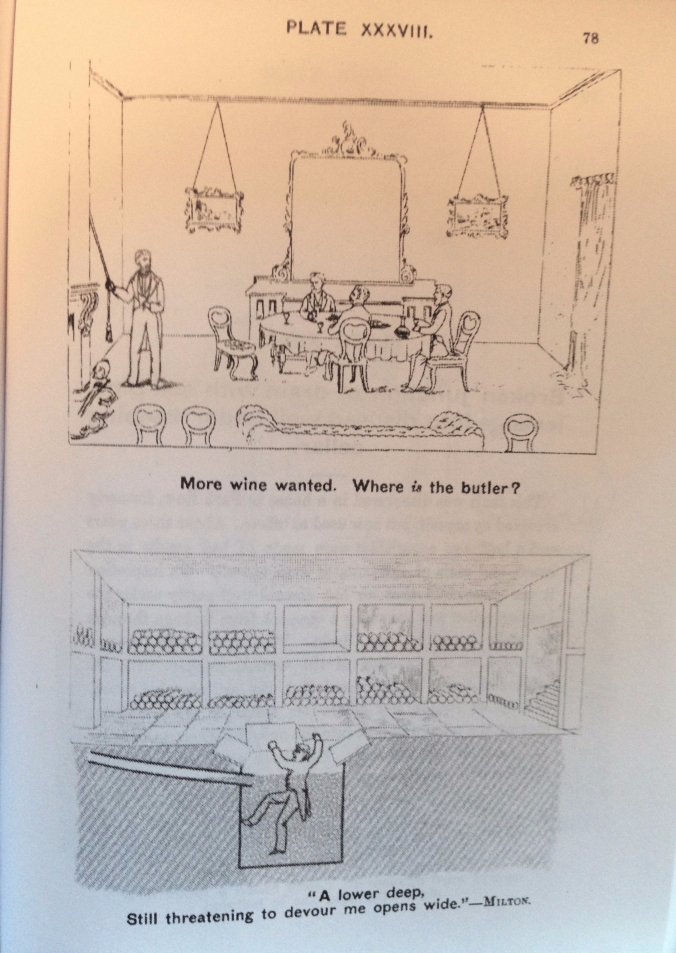 More subtle is the representation of the woman superintending drainage work for her shooting box in the Highlands with “One eye for her work, and another for the workmen” (with the double entendre surely intended). 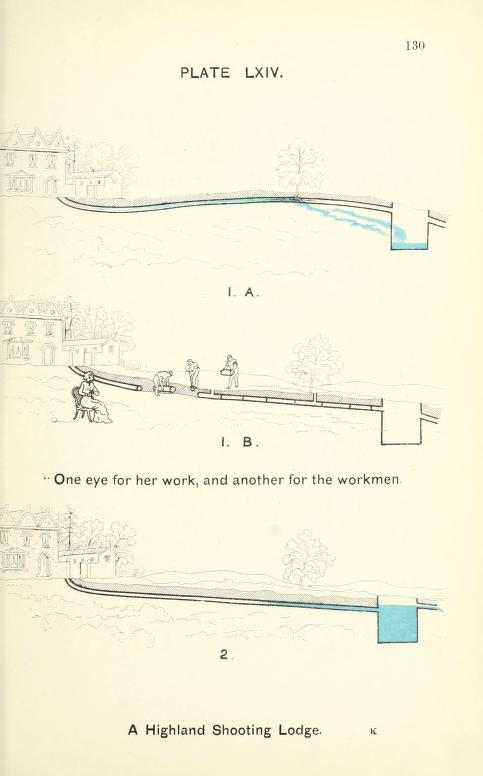 The “Jerry builder” buying seconds, is instantly recognisable by his louche, unprofessional demeanour. 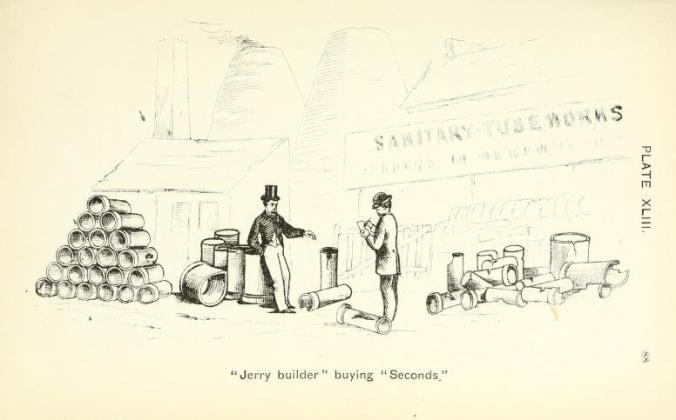 The dangers of building on contaminated land are aptly captured both in the illustration and slogan ‘Terrace of the Future on the Refuse of the Past”, suggesting that the health dangers that face us today are simply new versions of the problems confronted in the nineteenth century. 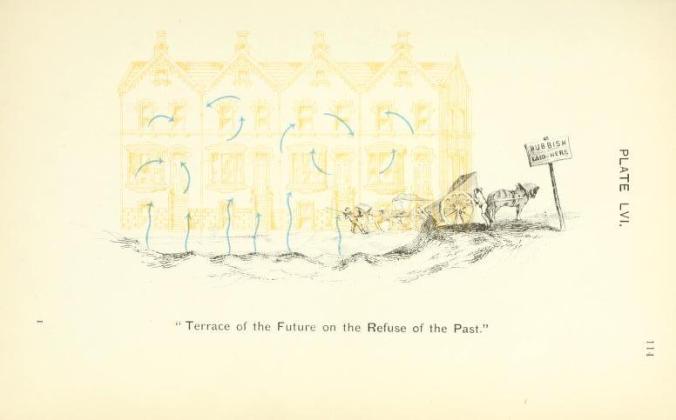 Teale also used his volume to promote one of his own inventions, a Window Ventilator in the Roof of a Brougham, enabling a busy doctor to have enough light and ventilation to read his book (or is that an ipad?) in comfort between calls.

Teale’s work skilfully attracts both “eye and brain”, drawing in a wide audience for the rather unlikely subject of household sanitary defects.

In recent years there has been a turn to animations as a way of capturing the essence of recent research and communicating it in a playful way to a wide audience (see, for example, ‘Jet Plight’ http://www.oxfordsparks.ox.ac.uk/jet).   For my money, Thomas Pridgin Teale is hard to beat.   In his campaigns for improvements in the education system, he also produced one of the most resonant book titles of all time:   Hurry, Worry and Money: The Bane of Modern Education (1883).[i]   What else is there left to say?