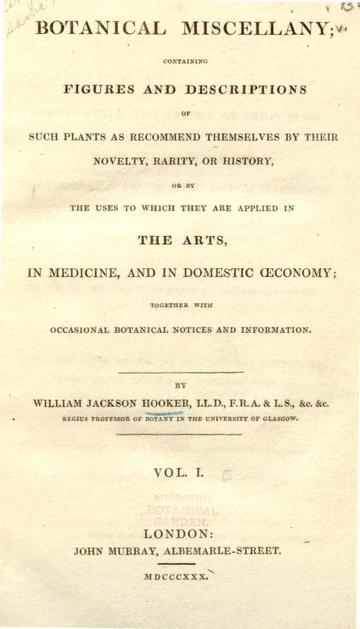 The Botanical Miscellany was the first in a series of periodicals established and edited by William Jackson Hooker (1785-1865), Regius Professor of Botany at the University of Glasgow. Its title page gives an exhaustive overview of its contents: 'figures and descriptions of such plants as recommended themselves by their novelty, rarity, or history, or by the uses to which they are applied in the arts, in medicine, and in domestic economy; together with occasional botanical notices and information'. 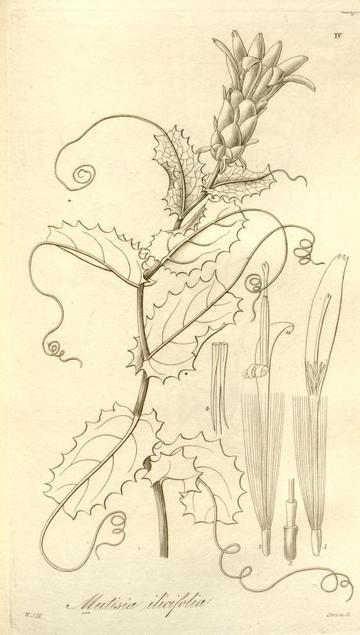 Many of the illustrations in the Miscellany are reproductions of drawings originally done by Hooker himself, and these can be identified by his initials (W.J. H.) followed by 'del' (short for 'delineated'), in the bottom left-hand corner of the images. Hooker was a systematic botanist, meaning that he was primarily concerned with studying and identifying the differences between species, rather than seeking to understand the plants as living organisms. Botanists in the nineteenth century tended to be either 'lumpers' or 'splitters', the former favoured a broad definition of species that 'lumped' varieties of plant together under a single name, whereas the latter preferred to 'split' plants into many different species according to the slightest dissimilarity. Hooker and his fellow systematists spent much of their time studying dried plant specimens that were carefully prepared by themselves or specialist collectors. From these specimens, they wrote descriptions of the kind published in the Botanical Miscellany, using Latin terminology to describe the tiny details and variations in the plant's structure that allowed them to decide whether it was a separate species or of a kind already known to them.